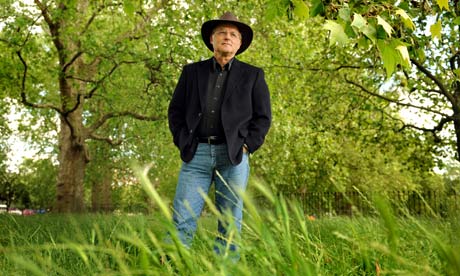 photo by Linda Nylind for the Guardian

Richard Louv’s new book, “The Nature Principle’ has just been published.  Following on “Last Child in the Woods: Saving our Children from Nature Deficit Disorder”, a book that links many childhood disorders to a disconnection to the natural environment, Louv’s latest book (see this article in Outside) calls for an increased connection to the natural world to compensate for our increasingly technological lifestyles. He writes that the future belongs to those individuals and businesses that can balance the virtual with the real. As a psychologist who works with many adults and children, I would like to attest to the veracity of  Louv’s journalistic discoveries with examples from people’s lives.It is important to note that when Louv writes about nature he is not simplistically drawing a line in the sand that demarcates “natural and wild” places from “civilized and urban” ones. Rather he describes nature more as an ecosystem that includes both that which is wild and that which is cultivated. Nature is more like a verb, behavior that takes place in communication with innate ecosystems.

Louv states that time spent in nature can facilitate better psychological functioning by stimulating the senses.  I would add that mental health is achieved not only by enhancing sensory stimulation but also by promoting agency – directed interactions with stimulation outside of the self.  Consider the 43-year-old man who was anxious and obsessive. His thoughts were consumed with ongoing ruminations about what he did wrong.  He excelled at talk therapy and loved nothing more than settling into the “patient’s” chair and discharging his distress.  It was helpful but it didn’t change him.  What seemed to actually make a difference in his life was hiking.  After trying out some walk therapy he began to take in a vista of old growth trees in the park near my office.  His future-time perspective increased. He developed a sense of his own life as more continuous and evolving rather then truncated and present-oriented.  When I encouraged him to start hiking, the physical complexity of navigating complicated (though not difficult) terrain caused him to interact more directly with his physical space. He had less space for his ruminative thoughts when he navigated a series of boulders.  He broke his mind’s obsessional habits when he had something hard and complicated to do with his body.

Louv writes that a fuller sensory life is necessary to compensate for our overly high-tech lives. A fuller sensory life also improves psychological flexibility.  In my work with children I have seen that cognitive rigidity is concomitant with many disorders (ADD, PDD, anxiety and separation issues and bipolarity).  Where does the rigidity come from?  Sometimes, it can result from the lack of opportunity to successfully and independently navigate complex environments. While it is not true that children of earlier historical periods who grew up playing in the woods were problem free, it is true that any child who has the opportunity to manage him or herself  in less controlled environments can become more psychically flexible.  Psychic flexibility is an antidote to a great many psychological disorders.  A young boy with whom I worked overcame a series of traumatic fears brought on by his exposure to the collapse of the World Train Center on September 11 by figuring out how to climb up a small hill of boulders.

Louv makes the point that the mind is overexposed to constant and increasingly technological interruptions that can disrupt the formation of abstract long-term goals.  He states that while we need the internet and other information technologies for intellectual information we need nature more than ever to “ignite our senses”.  The hybrid mind is one that balances our need for both.

Personhood is a highly complex system and every person is composed of a multitude of parts. There are more than two.  Every person needs unstructured time in undefined spaces (like the woods, or the beach, or mountaintops) to develop a dialogue between the many parts of his or her self.  Too much technology that demands immediate attention tends to exert a kind of formative control over the mind and disrupts an important conversation between the unique and varying states that constitute personhood. Further, when that important process of self-experience is disrupted the connection between self and other is also disrupted.  Importantly, human and most mammals are dependent creatures.  We need each other to survive. To a large extent, healthy psychological development depends on our capacity to participate in and build community.

David Brooks wrote recently, “It’s not about you.”  Recognizing the interplay of different life forms is one of any ecosystem’s profound impacts. All life forms have to cooperate in order to survive.  Our technological world has enabled humans to fantasize that they are the masters of the environment not collaborators with it.  The less time we spent living in nature, the more empowered is human narcissism.  It is that predilection to become absorbed in one’s self that haunts the character of ourselves, our children and our civilization.