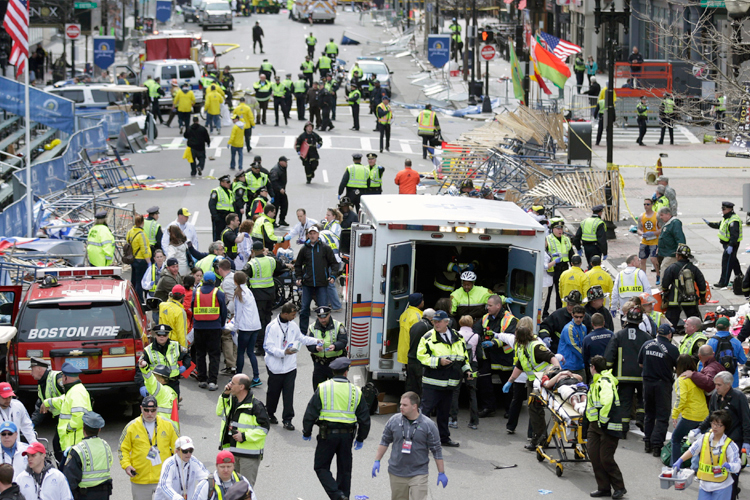 At a moment when we mourn eight-year old Martin Richard, 23 year-old Lu Lingzi, 29 year-old Krystle Campbell and 26 year-old Officer Sean Collier as well as the 176 other victims of suspects Dzhokhar and Tamerlan Tsarnaev terrorist actions, isn’t it time to make peace with some limits on personal freedoms?

The tragic events of the Boston Marathon that left four innocent people murdered and one suspect dead have spurred conversation, debate and theory.  As a psychologist I have no idea how these two brothers could presumably become so violently sociopathic, even assuming the influence of jihadist teachings and/or training. The complexity of the human mind derives from a variety of internal and external influences.  The systemic valence of factors from biological and temperamental predisposition to the exposure to familial and cultural forces plays out differently in each person leading to turns of events that often can’t be predicted.

According to their statements, the suspects’ friends and family’s didn’t even know and couldn’t have imagined the turn the brothers’ lives had taken.

In other words, even if we do finally understand the minds of the Tsarnaev brothers we won’t necessarily be able to predict who will next turn violent enough to want to maim members of his or her own society. This type of troubling uncertainty can be difficult to tolerate particularly by politicians. Yet the lack of predicative ability characterizes the times in which we now live.

Just as the best of us can now do so much good, so too can the worst of us now do such great evil.

Given the multiple factors operating on every individual at all times, we may have lost the ability to know which constellations of factors can cohere to produce the behaviors that will endanger society.

It is for this reason that we may have to tolerate some limits on our freedoms.  We may have to require people who buy dangerous weapons to register and submit to background checks. Maybe military-style semi-automatic weapons can’t be used in recreation shooting.   Perhaps not all speech can be free.  When people create emotionally manipulative diatribes inciting others to kill on behalf of ideology perhaps they should be cut off.  I’m not sure we can let people become citizens of our country if they don’t believe in the basic tenets of Democracy and aren’t willing to accept and live by our laws.

Ideological in-fighting only leaves space for the worst parts of human nature to become somehow enlivened and then released into the population of innocent civilians with no restraint.  That doesn’t feel free to me.

As far as I am concerned as long as we can work how we wish to work, love whom we love, and think and create without adhering to cultural or political orthodoxy, I can learn to live with a few limitations.

In the natural free world, every species works within limitations in order to preserve itself.  Why should humans be any different? We can’t know or predict who or what will turn against humanity with the vehemence of murder. We can however put in place certain safe guards to keep unbridled aggression in check and to limit its power once it becomes aroused.

Good, ethical and moral proclivities often have a far grander scope in our society than the manifestation of antipathy and the urge to do large scale harm to others through terrorism.  We owe those who lost their lives so senselessly and those who have been so traumatically wounded new guidelines for living.  Freedom is a far greater word when it is upheld by the practice of limits. Throughout history people have done cruel and unspeakable things in the name of one form of entitlement or another. Freedom also means abiding by rules meant to make it harder for humanity’s potential ugliness to gain the power to kill the innocent in the name of its own evil.